In a pilot clinical study we evaluated an overall three-year survival rate in 32 vaccine-treated patients with stage VI disease. Clinical characteristics of treatment and control patients are presented in Table 1. All patients from the treatment group had a confirmed disease diagnosis, and received no other systemic therapy throughout the follow-up period, other than immunotherapy. The control group was composed retrospectively to combine patients who received conventional therapy previously, with matched prognostic and clinical characteristics of patients from control and treatment groups. If clinically indicated, patients from treatment and control groups underwent cytoreductive palliative surgery. 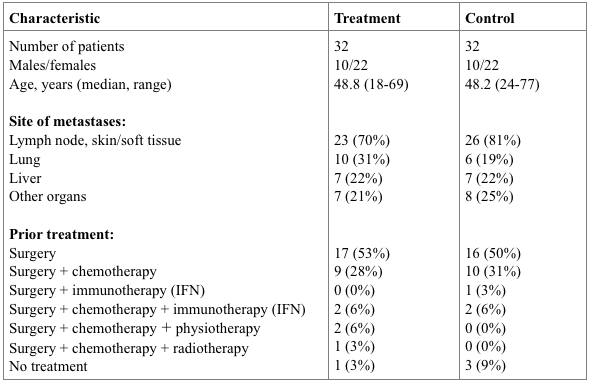 According to our clinical results, vaccine-based therapy was characterized by clinical safety and significantly lower toxicity, as compared with standard therapy for melanoma. No evidence of vaccine-mediated systemic autoimmune disorders was obtained, which could theoretically develop owing to the polyantigenic nature of the cellular vaccine used.

As shown in Figure 2, median survival rate in the vaccine-treated group of patients was significantly longer (P < 0.05) than that in the control group of patients. The overall 3-year survival rates in vaccine-treated versus control patients were 25% and 2%, respectively. Various degrees of clinical responses of more than 6 months duration were observed in 21/32 (66%) patients from the treatment group, and in particular complete response, partial response and disease stabilization was achieved in 5 (16%), 2 (6%) and 14 (44%) patients, respectively. Taken together, we conclude that xenogeneic polyantigenic vaccine (XPV) could markedly prolong survival in a significant subset of advanced melanoma patients. 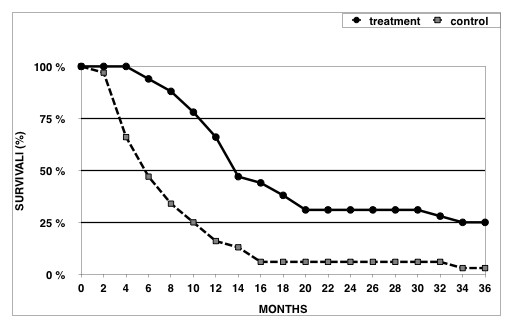 Importantly, almost all XPV-vaccinated patients who survived for 3 years after immunotherapy also survived for 2 additional years and longer. According to our data, a 5-year overall survival rate in 51 XPV—treated patients with IV stage disease was about 20%. It should be noted that patients with very advanced disease (most of them with an untreatable metastatic process) were subjected to vaccine therapy in this study.

We envisage that our immunotherapeutic protocol achieves maximal clinical efficiency when applied in preoperative or postoperative settings, i.e. before or immediately after surgical resection of the primary tumor and regional metastases. Consistent with this notion, our data indicates that survival of patients with III stage melanoma, who received postoperatively vaccine therapy, was significantly higher compared to that observed in control patients (Figure 3).

Taken together, our clinical results show that xenogeneic vaccinotherapy could be effectively applied for prophylaxis of melanoma relapses in surgically treated patients. Since XPV treatment has no serious side effects, its clinical application could be advised in patients with I-III stages melanoma.

Case 1. A 25-year-old female patient was referred to our Centre due to ulceration of Nevus pigmentosus of the anterior chest. Upon surgery, epithelioid cell melanoma (III stage of Klark invasion; penetration depth — 2 mm) was diagnosed histologically. Two months later, ultrasonography revealed an enlargement of axillary lymph nodes (15 mm) on the left; lymph nodes were surgically removed, and the presence of melanoma cells was confirmed histologically. Three months later, MRI showed multiple lesions (18 mm) and enlarged lymph nodes in the mediastinum. Two cycles of high level general controlled hyperthermia (43.3ºС) was used; however, lesions in the liver and mediastinum remained and had a tendency to enlarge, as judged from the MRI data. The patient developed profound general weakness. Relative lymphocytosis (41%) was noted in the blood test. Vaccine therapy was initiated, and one day after each cell administration an increase in body temperature to 38ºС and swelling around an injection site (~15 cm) were registered. MRI revealed no signs of metastatic lesions in the liver at 4 months follow-up (Figure 4 A, B). The remission lasted for 11 months, after which disease progression was noted in the form of multiple subcutaneous lesions on the mammary glands and left upper arm. All metastatic lesions were surgically removed, and a post-operative vaccination course was applied. The subsequent remission lasted for 10 months, after which subcutaneous lesions appeared in the right lumbar region. Those lesions were surgically removed. Combined treatment (surgery + vaccine therapy) ultimately provided complete long-term remission. A final follow-up 3.5 years after vaccine therapy found the patient in good condition with no signs of disease.

Figure 4. MRI scans of patient P before (A) and at 6 months (B) after vaccinotherapy. The metastatic lesions are indicated by arrows.

From these clinical examples we conclude that disease progression should not be considered as a reason for discontinuation of immunotherapy regimen.

Any other questions? Write to us